Gozanoishi-jinja Shrine
A landmark red torii perched on the edge of Lake Tazawa.

Very popular destination for those looking to become more beautiful. 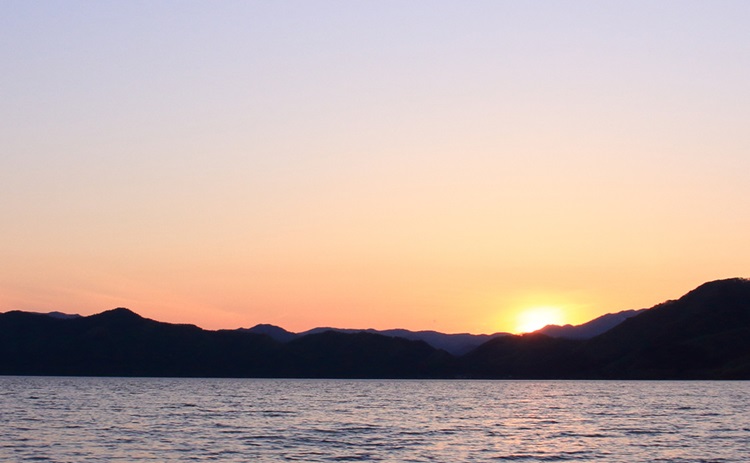 Located on the northern shore of Lake Tazawa, Gozanoishi-jinja Shrine features a beautiful red torii looking out over the lake’s blue waves. The name Gozanoishi, which translates literally to “stone seat,” was given to the shrine in 1650 when Yoshitaka Satake—the ruler of Akita—visited Lake Tazawa and rested on a stone.
The shrine’s red torii is said to have been erected near the fabled Nanairo-gi (seven-colored tree), a tree from which seven different kinds of tree sprang forth. Visitors to the shrine can see for themselves the mysterious tree, which comprises pine, cedar, sakura cherry, pagoda, alder, storax, and pear tree varieties.
Gozanoishi-jinja Shrine also pays homage to the legendary Tatsuko, who drank from the lake’s waters in search of everlasting beauty but was instead transformed into the lake’s guardian dragon, giving rise to the shrine’s nickname of “the Dragon Shrine.” In fact, a statue of Tatsuko can also be found within the shrine grounds, but unlike the golden bronze statue elsewhere on the lake, Gozanoishi-jinja Shrine’s statue of Tatsuko features a serpent-like lower body. The shrine is also home to the legendary kagami-ishi, the mirror-like stone Tatsuko is said to have looked at upon her transformation into a dragon after drinking the water of the nearby Katagashira spring.
Ah, poor Tatsuko and the price she paid in her quest for everlasting beauty! It is from this tale of woe that Gozanoishi-jinja Shrine became known as “the Temple of Beauty’s Guardian,” making the shrine a popular destination for those looking to get a helping hand from the divine in their own quests for beauty.
Read More
Hide
Get directions
Book a nearby hotel ¥11,380 ~