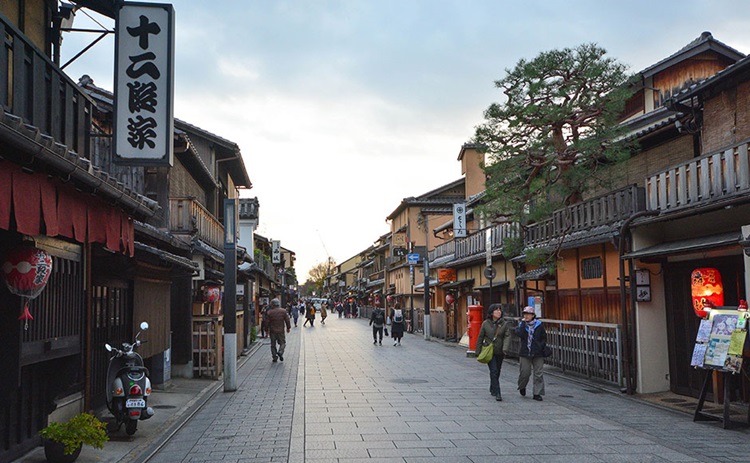 One of Kyoto City’s most famous streets, Hanamikoji is situated in the Gion district. This historic area hearkens back to the Japan of yesteryear, with its traditional wooden merchant houses and quaint ochaya, or teahouses. It’s also one of the Kyoto geisha districts, and you’re bound to spot one of these elegant figures on an evening stroll.

The historic architecture of Hanamikoji Street is one of its highlights, particularly the prevalence of its machiya, or wooden merchant homes, which feature narrow facades. Many now house restaurants where you can sample delectable local cuisine prepared in the distinct Kyoto style. Tucked in between these machiya are also ochaya, or teahouses, where you can learn more about Japanese heritage during a tea ceremony with a geisha. The most famous teahouse is Ichiriki Chaya, instantly recognizable for its imposing red walls. Ichiriki has hosted samurai warriors and some of the world’s most powerful politicians over its 300-year-old history.

The district comes alive during the Gion Matsuri festival each July. Processions of colorful floats and musical performances help draw over a million visitors to Hanamikoji every summer. In spring, stroll down this “blossom viewing lane” in the early evening and catch it at its absolute best during the Kyoto hanami season.
Read More
Hide
Get directions
Book a nearby hotel ¥6,400 ~