Sprawling park in the city overlooked by the historic castle 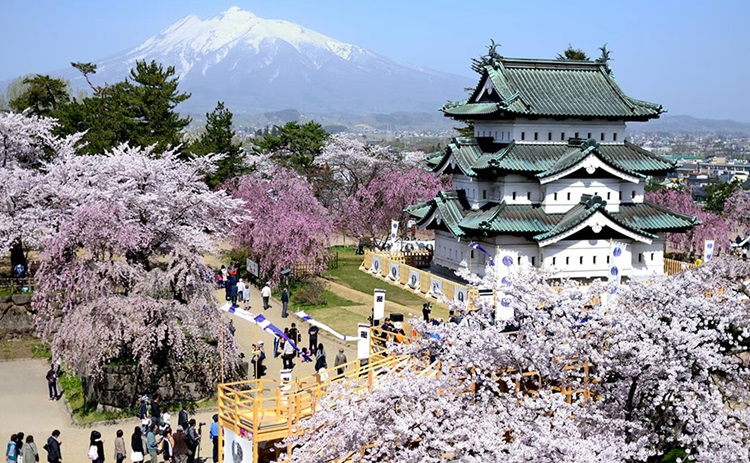 Covering a total area of over half a square kilometer, Hirosaki Park is a sprawling green space in the heart of Hirosaki City. The park is home to the historic Hirosaki Castle, one of only a handful of feudal era castles that remain in Japan. You can also find botanical gardens and peaceful shrines dotting the castle grounds. With 2500 cherry trees onsite, it’s a major hotspot for Hirosaki cherry blossom viewing, or hanami.
The castle was constructed in 1611 and the surrounding grounds once a family residence for the Tsugaru family during the Edo era. The park wasn’t opened to citizens until 1895. Today, it’s a major center for recreation, particularly during the Hirosaki Park Cherry Blossom Festival.
The cherry blossoms draw visitors from far and wide to Hirosaki Castle Park. These pink and white flowers blanket every corner of the park’s landscape during the season. However, Hirosaki Park is stunning in any season – in the autumn, the leaves of its trees are stained a beautiful bright scarlet and in winter, the annual snow lantern festival is held.
The park is conveniently located near many other attractions in Hirosaki, making it a great starting point for city exploration.