One of the twelve “original castles” which have survived in a good shape. 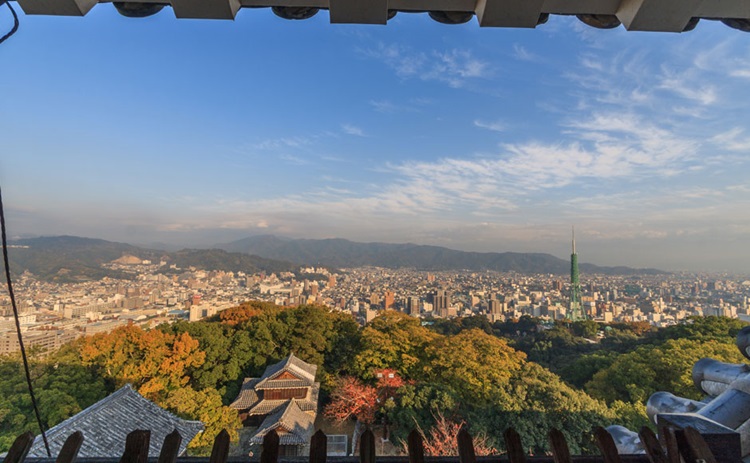 Matsuyama Castle towers over the center of Matsuyama city. It was built on the summit of Mt. Katsuyama (height 132 m), by Yoshiaki Kato, one of the seven generals who participated in a major battle at Shizugatake. The construction took place between 1602 and 1628, then the castle was handed to the Matsudaira family which was related to Tokugawa, the most powerful man in Japan at the time.

The castle is one of the twelve “original castles” which have survived the post-feudal era in a good shape. Its location was a strategic one as it gives it a bird’s eye view of the city and the Seto Inland Sea. Less martial, the grounds of the fort hold about 200 cherry trees which blossom in magnificent colors from late March to early April.

As often the case in Japanese castles, the main keep is located on the top of the hill behind well defended gates. To get there, simply take the ropeway or chairlift to ascend the mount (Okaido Tram Station). At the top you will find the keep which boasts multiple wings. Details about the fort itself and the feudal period are showcased in exhibits inside the building.

For those who would like to extend the visit and have a stroll around the Mount, head to the Ninomaru Garden which used to hold the second line of defense. There you will find a park that preserves the foundation of the fort but also offer green spaces and ponds inviting you to relax and enjoy the moment.
Read More
Hide
Get directions
Book a nearby hotel ¥6,000 ~

"Saka No Ue No Kumo" Museum (Clouds Above the Hill)