The Miho Peninsula—so much to see! We recommend you use a rent-a-cycle to enjoy the various historical sites and famous landmarks this area has to offer. 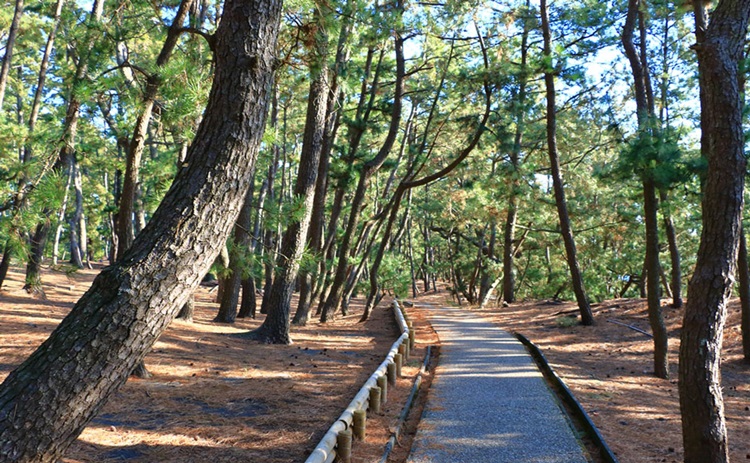 Miho no Matsubara is a fabulous pine grove on the Miho Peninsula, which reaches out from Shimizu Port into Suruga Bay. With a majestic view of Fuji, the mountain of the gods, this strand of beach is roughly 7 kilometers long and is filled with color, from the verdant shades of the pines, to the white foam of the lapping waves, to the azure of the ocean. The amazing scenery is so deeply ingrained in Japanese culture that it was featured in one of the Famous Places in the Sixty-odd Provinces by the great ukiyo-e artist Utagawa Hiroshige. That beauty has earned it a place in both the “New Three Views of Japan” (Lake Onuma, Miho no Matsubara, and Yabakei Gorge) and the “Three Great Pine Groves of Japan” (Miho no Matsubara, Niji no Matsubara, and Kehi no Matsubara). It is truly one of Japan’s great natural treasures! In 2013, the pine tree grove was registered by UNESCO as a component part of the World Cultural Heritage Site “Fujisan, sacred place and source of artistic inspiration.”
Miho no Matsubara has been the subject of countless classical Japanese poems (waka), since the time of the Manyoshu, the oldest anthology of waka poetry, which was compiled in the 8th century and was recently announced as the source of the new Japanese imperial era name, “Reiwa.” This region is also the setting of the famous Noh play Hagoromo, in which a fisherman finds a beautiful robe left hanging on a pine tree by a celestial maiden. The Hagoromo-no-Matsu is said to be the very pine she hung it on, and the nearby Miho Shrine is said to house a fragment of the robe itself.
The 500-meter path connecting Miho Shrine to the Hagoromo-no-Matsu is known as Kami-no-Michi, or “the road of the gods,” and is lined with venerable pine trees as much as 200 or 300 years old. Every year, late at night on February 14, a ritual is performed along this path, to welcome the heavenly spirits to earth.
There is a Miho guidance facility called Miho Navi in the center of the peninsula, with exhibits explaining the deep connection between Mount Fuji and Miho no Matsubara. It provides a variety of tourist information and guidance.
Read More
Hide
Get directions

Around Miho no Matsubara