Oshino Hakkai
This village is considered a Unesco protected site

This holy location are maintained by melting snows of the majestic Mt. Fuji. 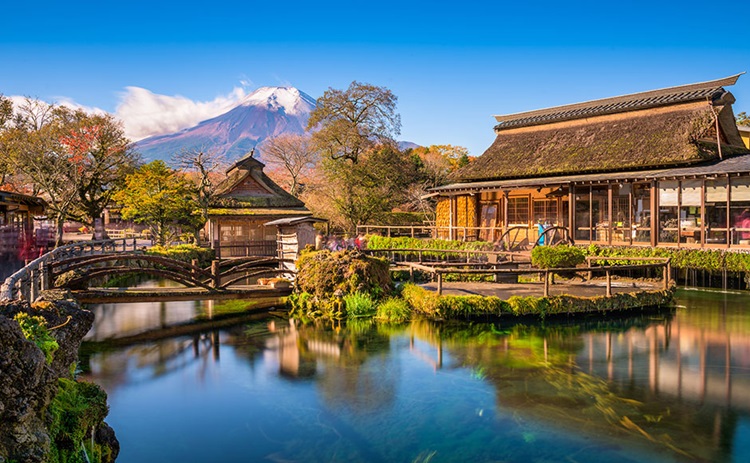 Located in the famed Fuji Five Lakes region just between Lake Kawaguchiko and Lake Yamanako, Oshino Hakkai is actually what remains of the now dried out sixth lake. The eight ponds forming this holy location are maintained by melting snows of the majestic Mount Fuji.

The water filtering down the porous layers of lava over the years come up chilled and crystal clear. As a result, many believe that this spring is holy and head there to make prayers.

Over the largest pond stands an open air museum named Hannoki Bayashi Shiryokan. The admission requires a small fee, which should not stop you from entering as it contains a traditional dwelling which shows the life of the original inhabitants, displays their tools, household items and even weapons. On a sunny day, the place offers a picturesque look with the Fuji Mountain in the horizon.
Restaurants, souvenir shops and street food can be found all around this small village. Try some grilled vegetables, mochi, pickles and sweets but do not forget to get some handicrafts as souvenirs before you depart.
As a historical note, you might want to know that this village is considered a Unesco protected site and dates back 1200 years old.

From nearby Hotel
- HOTEL MYSTAYS Fuji Onsen Resort : 20-30 min by car
Read More
Hide
Get directions
Book a nearby hotel ¥13,500 ~