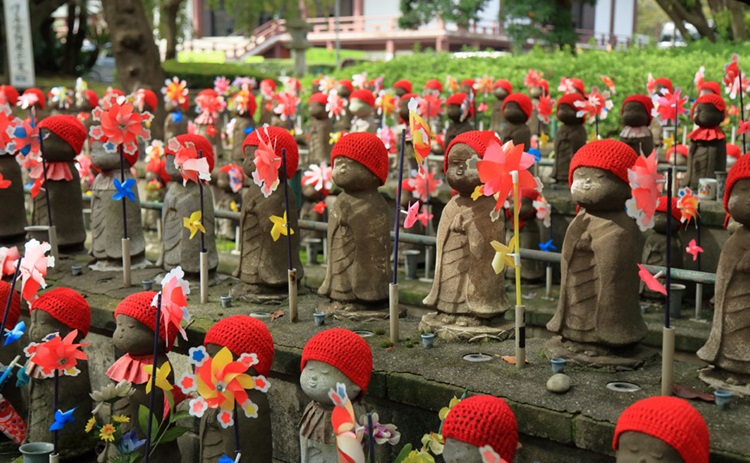 Zojoji Temple offers an oasis of Zen tranquility within the bustle of Tokyo City. With city skyscrapers and the Tokyo Tower looming in the distance, this urban escape – once the temple of the Tokugawa shoguns – is worth exploring for its well-preserved historic features.

Originally constructed in the year 1393, the temple was moved to its current location in 1598 by Tokugawa Ieyasu, who would become Japan’s first shogun. Zojoji served as the Tokugawa family temple for many years, and today a family mausoleum and museum can still be found on the historic site. The main entrance gate, or Sangedatsumon, dates back to 1622 and contains images of the Buddha in the upper story. This rare Edo-era landmark with its red-lacquered exterior is an unmissable photo opportunity for visitors. The temple’s 15-ton Big Bell, or Daibonsho, was constructed in 1673, and chimes impressively twice a day. Over the years, natural disasters have caused damage to the temple, but the site rebuilds and carries on.

Zojoji’s charms are best explored on foot, and the scenic backdrop of the city makes it an ideal location for captivating photos of Tokyo. This incredible tourist attraction and piece of history should certainly be part of any Tokyo sightseeing plans.
Read More
Hide
Get directions
Book a nearby hotel ¥6,900 ~