Historic Site: Osarizawa Mine
Earth’s gifts that have supported Japan for some 1,300 years

An 800 km-long pit that is Japan’s precious industrial heritage, and its largest mining remains 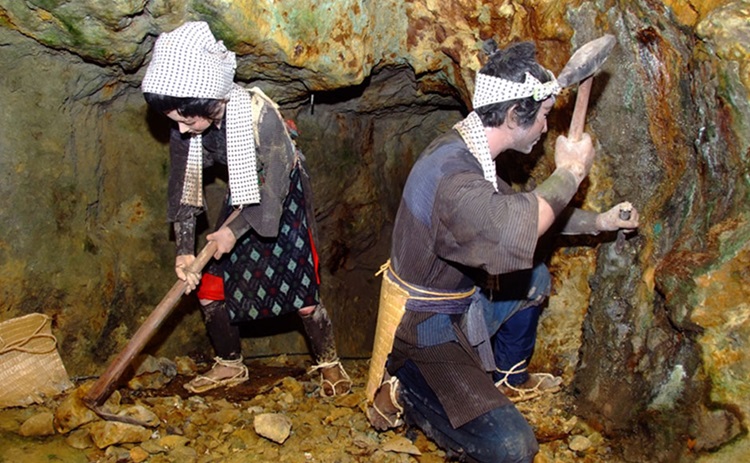 The north-eastern region of Akita Prefecture is known as Japan’s largest mining zone. Among the many mines in this area is the Osarizawa Mine, which has a 1,270-year history spanning from its discovery in 708 to its closure in 1978. As one story goes, the gold mined from a section of the Osarizawa Mine was used extensively to create objects and structures during the gold culture of Hiraizumi established by the Fujiwara Clan at the end of the Heian Period, and in casting the Great Buddha of Nara’s Todai-ji Temple during the Nara Period. Osarizawa Mine became a valuable resource that supported Japan’s modernization after the Meiji Restoration, and the country’s post war period of rapid economic growth.
Osarizawa Mine is a vein-type copper ore deposit, in which magma seeps into the cracks underneath the ground and hardens into fine vein-like formations. The mine still has a variety of precious industrial heritage to view, such as a perfectly intact pit from the Edo Period and Japan’s largest mining remains dug out by humans. The Sightseeing Pit Tour takes you through Japan’s largest mining pit, and is recommended for first-time visitors to learn about the mine’s development from the Edo Period to modern times. There is also a bus tour for visitors who want to leisurely explore the area further. It takes you to various valuable facilities outside the mining pit, including the remains of Japan’s largest mineral ore sorting area used for processing 100,000 tons of copper ore every month, and a smelter with a chimney that is designated as a Civil Engineering Heritage site. Visitors can also try some hands-on classes that you’ll only find at a mine, such as making your own kaleidoscope and accessories using natural stones at the “Digging for pure gold and gold dust” and “Digging for natural stones” experiences. Of course, you can take home your creations as well. You will surely enjoy a memorable time at Osarizawa Mine.
Read More
Hide
Get directions

Around Historic Site: Osarizawa Mine