Kirishima-jingu Shrine
The shrine’s worshippers have included Ryoma Sakamoto, one of the most famous figures from Japanese history.

The vermilion-lacquered torii gates and dense groves of trees create an awe-inspiring atmosphere. 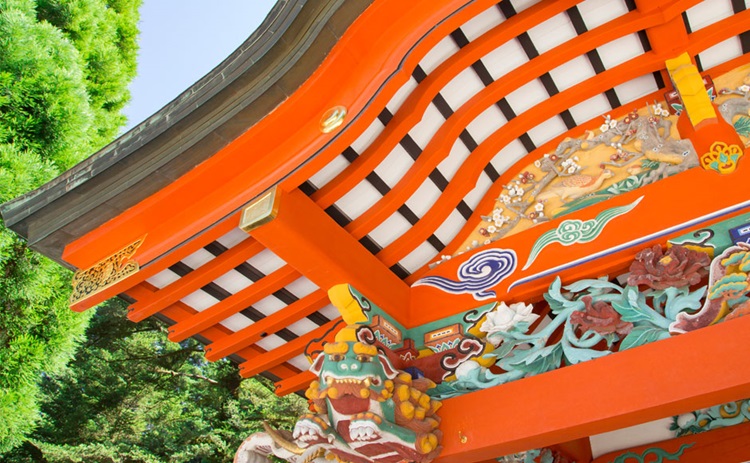 Visitors pass through the giant torii gate facing the national highway and proceed along the main path into the shrine grounds, surrounded by dense forest. The majestic shrine complex soon comes into view, elegantly lacquered with vermilion. Along the way are the shrine’s famous 800-year-old sacred tree and sacred rock. Kirishima Jingu enshrines the deity Ninigi-no-Mikoto, a central figure in the mythology of Japan’s founding. Its long history dates back to its establishment in the sixth century, and it is even said to have been visited by the famous samurai Ryoma Sakamoto and his wife. Today, the shrine sees about 1.5 million worshippers annually.
Kirishima Jingu Shrine is thought to have originally been built between the volcanic peaks of Takachiho-no-mine and Ohachi, but it was burnt down and rebuilt several times due to eruptions from the Kirishima volcanic range. The shrine was relocated to its current site over 500 years ago. The current complex was constructed and dedicated in 1715 by Yoshitaka Shimazu, the twenty-first head of the Shimazu clan and fourth lord of the feudal domain of Satsuma. Over one hundred rituals are carried out at Kirishima Jingu Shrine annually. Every year on New Year’s Day and February 11, the main hall hosts a kind of performance known as Kumen-daiko. This soul-stirring entertainment, in which nine taiko drummers wearing masks representing ancient deities reenact the myth of Ninigi-no-Mikoto’s descent from heaven, has drawn attention as a unique local performing art.
The grounds of Kirishima Jingu Shrine are also known for their beautiful flowers and fall foliage. Cherry blossoms are best viewed from late March to early April, while Kyushu azaleas and colorful fall leaves are at their peak until around late June and late November, respectively. The Kirishima City Tourism Information Center even offers a service that rents kimonos to visitors to wear at the shrine. The juxtaposition of the shrine’s vermilion-lacquered torii gates with traditional Japanese attire makes for stunning photographs, and what is sure to be an unforgettable experience.
Read More
Hide
Get directions
Book a nearby hotel ¥4,700 ~