Tenmonkan
If you’re looking for Kagoshima gourmet, this is the place!

Crisscrossed by trams, Kagoshima’s largest downtown area mixes the charms of the old and the new. 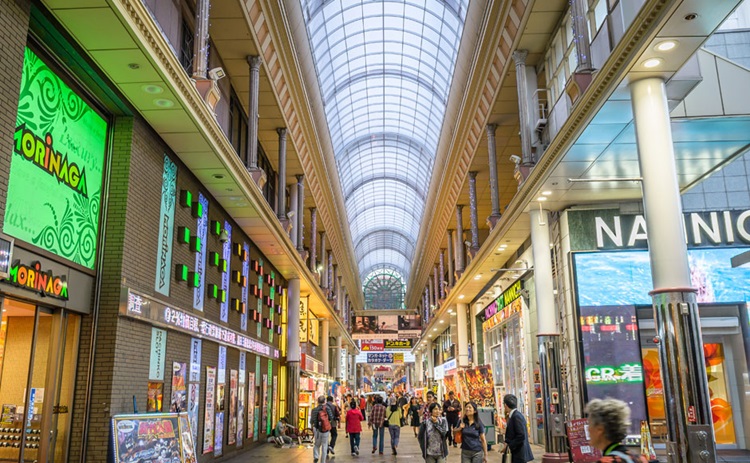 Tenmonkandori, with its lovely trams crisscrossing the area, is the largest downtown area in Kagoshima. The name of the street is associated with the “Meijikan” (also known as “Tenmonkan”) facility, which was built by Shigehide Shimazu in 1779 for astronomical observation and the production of calendars. The Tenmonkandori arcade is lined with souvenir shops and restaurants serving local cuisine, as well as cafés, boutiques, and a variety of other stores that make up a vibrant shopping district thronged with visitors. Benches are installed in several places all along the street, providing rest spots for walked-out shoppers.
One thing not to be missed is Shirokuma (polar bear), shaved ice topped with colorful fruits. There are also stores that offer desserts made with sweet potatoes, Kagoshima ramen, and Kurobuta pork dishes, providing visitors an opportunity to encounter a diverse range of local gourmet dishes.
Just past the end of Tenmonkandori stands the verdant Terukuni Shrine, shrouded in stillness. There are also such tourist sites as the St. Francis Xavier Cathedral, named after Francisco Xavier who brought Christianity to Japan, parks, and bronze statues of Takamori Saigo and Toshimichi Okubo among other attractions. Spots for visitors tosee Kagoshima history firsthand dot the area around this bustling street.

Read More
Hide
Get directions
Book a nearby hotel ¥4,700 ~

Museum of the Meiji Restoration