Senganen
A garden made to resemble the scenery of Sakurajima and Kinkouwan Bay.

There are many highlights to see in the vast and spacious garden, including some that are registered World Heritage sites. 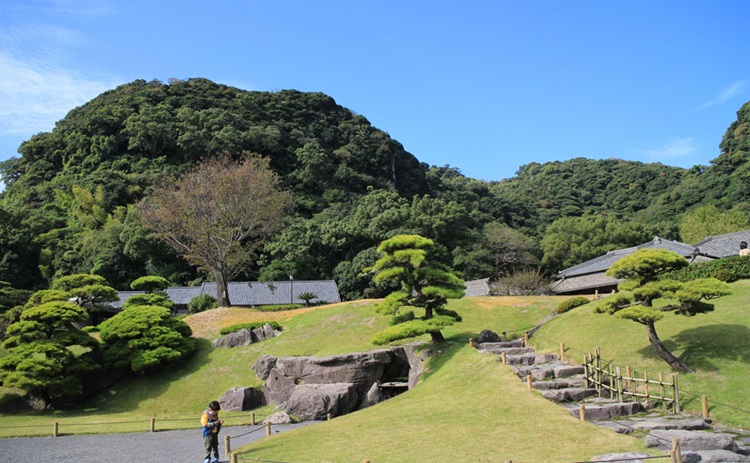 A Shimazu family villa, built in 1658 by Mitsuhisa Shimazu, the 19th head of the clan. Many different kinds of seasonal flowers grow on the spacious garden of about 15,000 tsubo (approx. 50,000 square meters), and several historical sites telling the history of the Shimazu family remain as well. Visitors can enjoy the magnificent scenery, wherein Sakurajima is represented by a miniature hill and Kinkouwan Bay with a pond.
The villa served as a sort of state guesthouse in Kagoshima from the final days of Tokugawa Shogunate to the modern era. Many important figures from Japan and overseas, including imperial family members such as Emperors Yoshihito and Hirohito, as well as Edward VIII, Crown Prince of England, and others. The palace is open to public, and there is also a tour that comes with a green tea service. Elegant seasonal entertainment such as the Gokusui no En winding stream banquet, Nagashibina paper doll floating festival, Tanabata star festival, and the Kusajishi shooting ceremony to demonstrate archery skills are all attractions that are found nowhere else but the Senganen Garden.
Other highlights found in the garden include Tsurudoro stone gas lanterns, the bamboo forest where moso bamboo is considered to have been planted for the first time in Japan, and the ruins of the Hansharo reflective furnace, which is a World Heritage Constituent Asset. There are also restaurants where visitors can sample local cuisine and shops that offer such local specialties as Satsuma Kiriko cut glass, among many other varieties of souvenirs. This is a tourist destination for visitors who want a relaxing time in a regal atmosphere.
Read More
Hide
Get directions
Book a nearby hotel ¥4,700 ~

Museum of the Meiji Restoration