Miyazaki Shrine
A shrine dedicated to Emperor Jimmu, Japan’s first emperor, who was born in Miyazaki

Prayer services are held 1,000 times annually. The “Goshinkosai” festival held in autumn is the largest in Miyazaki Prefecture, and is an absolute must-see. 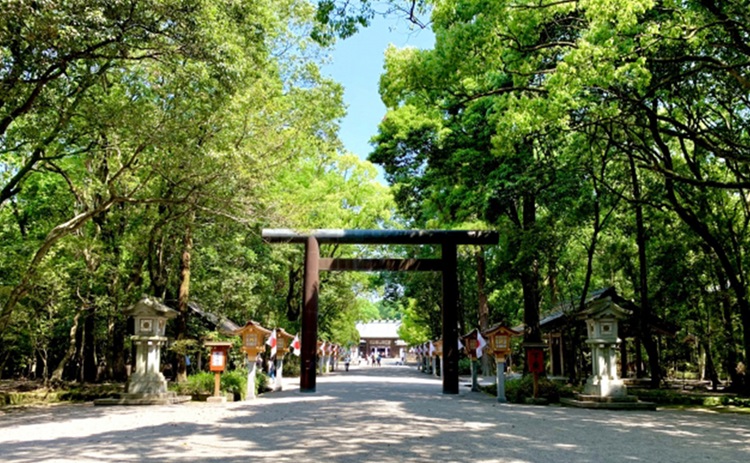 Miyazaki Shrine, which is dedicated to Emperor Jimmu (also known as Kamu-Yamato-Iware-biko), is said to have been established by Jimmu’s grandson Takeiwatatsu no Mikoto to honor the virtue of the Jimmu’s Eastern Expedition. (The Eastern Expedition is Japan’s oldest heroic legend in which the prince sets out from Miyazaki eastward, overcoming many trials, returning home, and eventually becoming Japan’s first heavenly sovereign.) Japan has a custom called “Tsuitachi Mairi,” where a person will visit a Shinto shrine on the first day of each month to pray that nothing bad happens in the coming month. Miyazaki Shrine is famous for its “sanpai mochi” that is only sold on the day of Tsuitachi Mairi. The mochi is imbued with the wish for “good fortune and avoidance of disaster,” and different sanpai mochi are prepared each month using seasonal ingredients. While Miyazaki Shrine welcomes some 600,000 visitors every year, the first of the month is an especially popular day for visitors. The largest festival in Miyazaki Prefecture, the “Miyazaki Shrine Goshinkosai,” is held every autumn. This festival, which the local Miyazakians fondly nickname “Jimmu-sama,” was formerly held on October 27 (the day Emperor Jimmu is believed to have set out from Miyazaki) and the day before that (October 26), but nowadays is observed on October 26 and the next Saturday or Sunday thereafter. There is also the ritual yabusame held on April 3 each year. Warriors dressed in the garb of 13th-century samurai ride horses at tremendous speed, and shoot at a target with a longbow from horseback. Watching this sight, you’ll feel as though you’ve stepped back into a medieval Japanese picture scroll!
Read More
Hide
Get directions