Nara Park
Get some fresh air at this splendid park.

Monuments of the Tenpyo culture stand proudly on the lush, sprawling grounds. 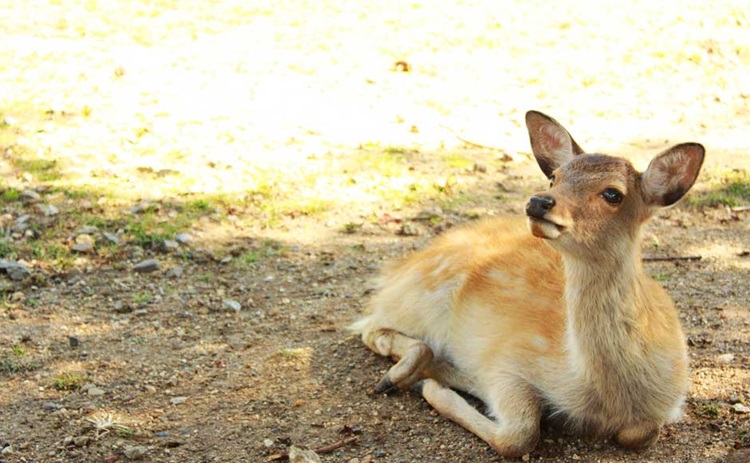 This sprawling park lies to the east of Nara’s city center. The vast grounds cover an area of 660 hectares that includes Todaiji Temple, Kofukuji Temple, Kasuga Taisha Shrine, the Nara National Museum, the Shosoin Repository, and many more of Nara’s top tourist attractions. The park is well known for its population of wild deer. About 1,000 live inside the park, and have been collectively designated a natural treasure by the Japanese government. Deer have a special significance to Nara; they are mentioned in the Man’yoshu, the oldest existing collection of Japanese poetry compiled during the Nara period, and the Shinto deity enshrined at Kasuga Taisha is said to have arrived in Nara on the back of a white deer.
Tourists who would like to feed the deer can purchase rice crackers from stalls inside the park. To prevent damage to the park’s trees and buildings as well as injuries to visitors, the deer’s antlers are trimmed in a traditional ceremony carried out every October at Rokuen, a facility for the protection of the deer located on the grounds of Kasuga Taisha Shrine. Another popular event is the Shikayose ceremony, in which deer are summoned at the Tobihino field by the blowing of a French horn.
Set against the backdrop of Mount Wakakusa and the mystical virgin forest of Mount Kasuga, Nara Park is a place like no other where the wonders of nature and history stand side by side. In addition to the temples and shrines, other points of interest are the “parks within the park.” These include Araike Park, which has a large grassy space and a pond; Chayama Park, planted abundantly with Nara double-flowered cherry trees, the floral emblem of Nara Prefecture; and Sarusawaike Park, where the five-storied pagoda of Kofukuji Temple and willow trees create graceful reflections in a pond. Why not take a leisurely stroll to explore them all?
Read More
Hide
Get directions
Book a nearby hotel ¥26,700 ~