Todaiji Temple
Welcome to the home of the Great Buddha of Nara. 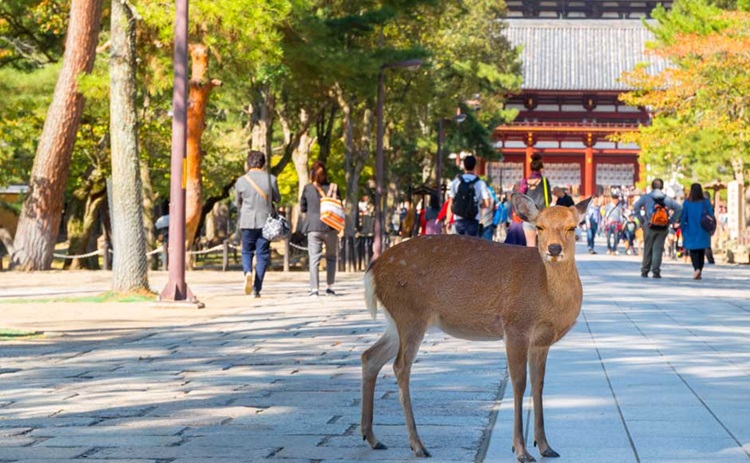 Todaiji is the most famous temple of the Nara period, exemplifying the imposing Daibutsuyo style of religious architecture. Its Great Buddha Hall (Daibutsuden), from which the style derives its name, is the largest wooden structure in the world. To get the full effect, the hall is best approached from the Nandaimon Gate. Right in front of the hall stands one of its highlights, a massive octagonal lantern ornamented with delicate designs. The temple’s precincts are dotted with structures that have been designated National Treasures and Important Cultural Properties. The Great Buddha itself is an overwhelming presence, at about fifteen meters in height.
After taking in the Great Buddha Hall, climb the stone steps to the Bell Tower, famous for the sonorous sound of its bell. Further along the stone path lies Hokkedo Hall, the temple’s oldest surviving structure. The rear section is dated to the early years of the Tenpyo era (729-749), while the front section was built during the Kamakura period (1185-1333), and typifies the monumental Daibutsuyo style. These different architectural styles were integrated through sophisticated techniques to create the elegant structure seen today. Nigatsudo Hall, famous for the traditional Omizutori ceremony in which water is drawn from a sacred well to usher in the coming of spring, is also not to be missed. The side opposite the Great Buddha Hall has a balcony offering panoramic views of the entire city of Nara.
Nearby, the Todaiji Museum hosts rotating exhibitions on the history and art of Todaiji Temple. The museum also has a café where you can enjoy drinks such as coffee and green tea, as well as a shop selling a variety of souvenirs.