This is a location that still retains a diverse range of nature, even though it is located within Tokyo metropolitan area. 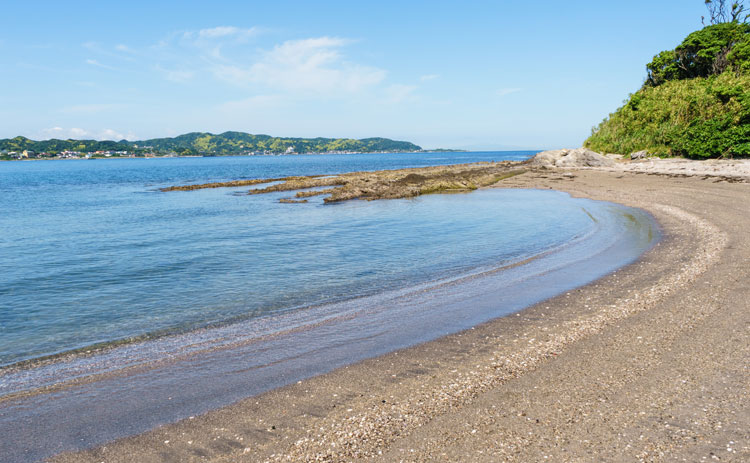 "Okinoshima" is an uninhabited island located at the southern tip of Tateyama Bay on Boso Peninsula. It is an island that is connected to land and it is a part of Minami-Boso Quasi-National Park. The island was located 500 meters offshore until the Meiji Era, but when the Great Kanto Earthquake thrust up the sea floor and sand sediment accumulated, it eventually became linked with land in 1953. This is a location that still retains a diverse range of nature, even though it is located within Tokyo metropolitan area.
Rocks and sand beaches coexist, where visitors enjoy fishing and other shore activities, as well as collecting sea shells. Okinoshima Beach Resort is open in the Summertime. This area is the northern limit for the coral reef, which can be observed when snorkeling. This is also a place where visitors can encounter beautiful seashore plants, such as crinum and canavalia lineata.
Forest spreads on the interior of the island, filled with lush warm temperature plants, such as Japanese cinnamon or Machilus thunbergii, so much so that the location appears gloomy even during day. Machilus thunbergii that measures 18 meters in height in particular, is considered the sacred tree that belongs to the protective God of the island. There are also abundant relics from Jomon Era as well as geological layers that fill the island with places of interest. There are many non-profit organizations that offer nature-experiencing programs at various sites on Okinoshima Island. Tours offered by such organizations can broaden pleasure of visitors even further.