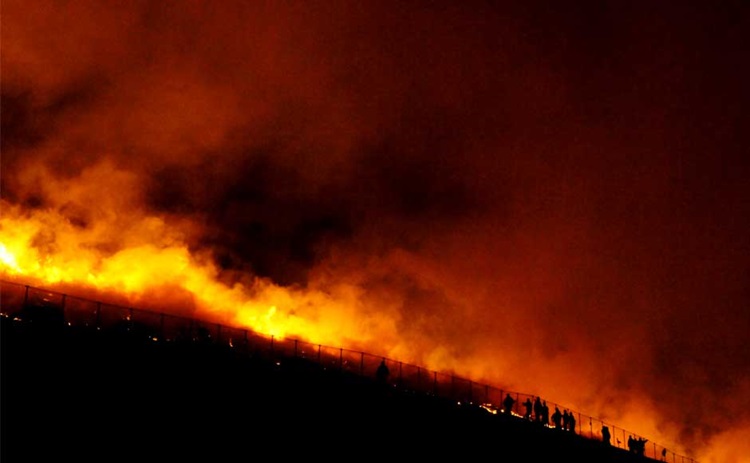 Located at the eastern end of Nara Park, Mount Wakakusa is known for its shape resembling three overlapping bamboo hats. The 342-meter mountain is covered in grass, and grazing deer can be found throughout its gentle slopes. The summit offers a spectacular view of the ancient capital of Nara, including the temples of Todaiji and Kofukuji.
The mountain’s scenery changes with the seasons, from cherry blossoms in spring to Japanese pampas grass and colorful foliage in fall. Although the path to the summit looks easy from a distance, it is actually a steep incline requiring about thirty to forty minutes of hiking. The path is accessible from both a northern gate and a southern gate, after paying an entrance fee. Behind Mount Wakakusa lies the mystical old-growth forest of Mount Kasuga, a World Heritage site.
The summit of Mount Wakakusa is also home to the Uguisuzuka Kofun, a historic burial mound thought to have been constructed around the fifth century. The large, keyhole-shaped burial mound is 103 meters in length, and even makes an appearance in The Pillow Book, the famous account of courtly life written by Sei Shonagon in the eleventh century. A prescribed burn of the mountainside brush is conducted every January in one of Nara’s most important seasonal traditions. The entire mountain is set ablaze, illuminating the ancient capital in an incredible spectacle. The prescribed burn is accompanied by a massive fireworks show.
Read More
Hide
Get directions
Book a nearby hotel ¥26,700 ~