Asadokoro Coast
White envoys of winter from far away Siberia

A sanctuary for some 700 white swans, after their long journey 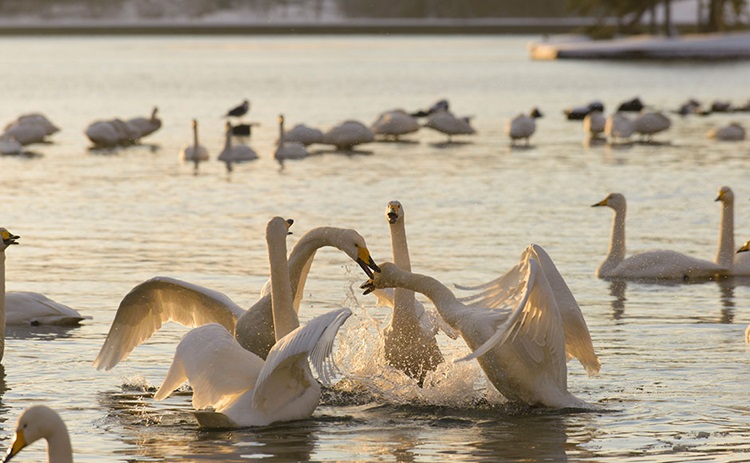 The Asadokoro Coast of Hiranai Town, located in the deepest part of the eastern side of the Natsudomari Peninsula, has long been known as a wintering place for swans, which is a distinctive winter scene in this area. Every year from around the middle of October to the end of March, you can enjoy the magnificent sight of the large northern hemisphere white swans (whooper swans) that come to rest in Japan after traveling some 3,000 km from Siberia. These whooper swans breed in Siberia, where even the daytime temperature can drop below freezing. This means that during the winter, the birds are unable to hunt for food as it is trapped in the ice. So to escape the harsh winter of Siberia, the whooper swans fly south to relatively warmer climates like in Japan. For these whooper swans that prefer the low-lying and wide water surfaces of rivers, lakes, reservoirs, rice paddies and creeks, the sweeping and shallow Asadokoro Coast is no doubt a very comfortable place. Around the time when nature signals the end of winter, the whooper swans return to Siberia once again.
This stretch of coast, where you can see up to 700 or 800 whooper swans at busy times, has also been designated a Special Natural Monument as “Swans on Kominato beach and their wintering place.” Also, early on a bitterly cold winter morning when the temperature drops to below freezing, you may be lucky enough to see the natural phenomenon of Kearashi, when mist rises like steam from the water’s surface. White mist floating over the sea surface as the sun rises is truly a magical sight to see. You can also access Matsushima and Komatsushima from the coast, which are also bustling as scenic spots even outside the winter season.
Read More
Hide
Get directions