Eboshidake
Arrive to see 360° sweeping panoramic views from the peak

Light mountain climbing that many people can easily enjoy, from families with small children to the elderly. 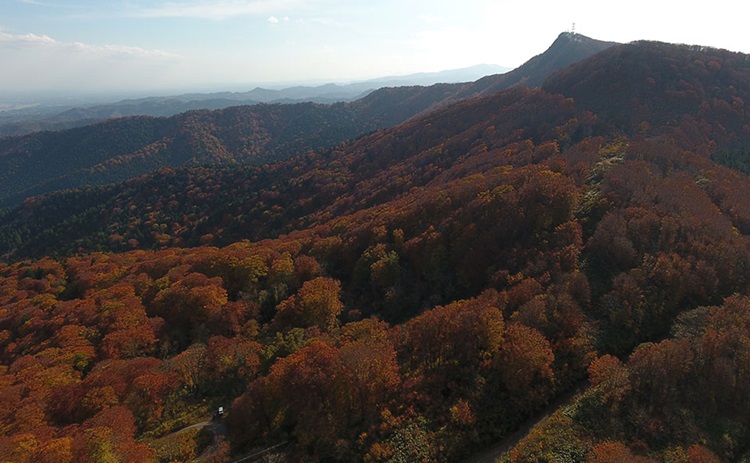 Standing at 719.6 m, Mount Eboshidake is the symbol of Noheji Town in Aomori Prefecture. With its gentle incline, even families can easily enjoy mountain climbing together. Known for its many varieties of subalpine flora that change along with the altitude, Mount Eboshidake is a familiar favorite among mountain climbing enthusiasts in Aomori and other prefectures as well. The mountain trail weaves through a natural forest of Hiba and beech trees that are more than 100 years old, which infuse the atmosphere with negative ions. More than anything though, the spectacular and sweeping view of Mutsu Bay from the mountain’s peak is not to be missed. The 360° panorama provides views of Hokkaido and the Shimokita Peninsula to the north, the Hakkoda Mountains to the south, the Pacific Ocean to the east, and Mount Iwaki to the west. It takes a little over an hour on average to climb from the base of the mountain to the peak. There is also a road leading to just before the peak, which is convenient for people who aren’t confident they can climb the mountain and would prefer to drive to the top.
Every year in June, when the mountain is open for climbing, prayers for the safety of all mountain climbers that year are held at the Eboshi Shrine located on the peak. The previous enshrinement hall decayed and crumbled over time, and was rebuilt in its current location. Nearby is a signboard that still stands as an Eboshi Shrine Relic, in remembrance of the previous shrine. Visitors arriving by car will probably notice a large rocky hill called the “Legend of the Night Crying Stones,” which is near the car park at the base of the mountain. The legend goes that around the start of the Meiji period, a man went out hunting one day and never returned, and his daughter cried everyday waiting for her father to come back. The rocky hill symbolizing this legend leaves quite an impression at the starting point for climbing Mount Eboshidake.
Read More
Hide
Get directions