Ganki Street
The alleys of houses extending 16 km in total

Stroll through the alleys with graceful features of a castle town 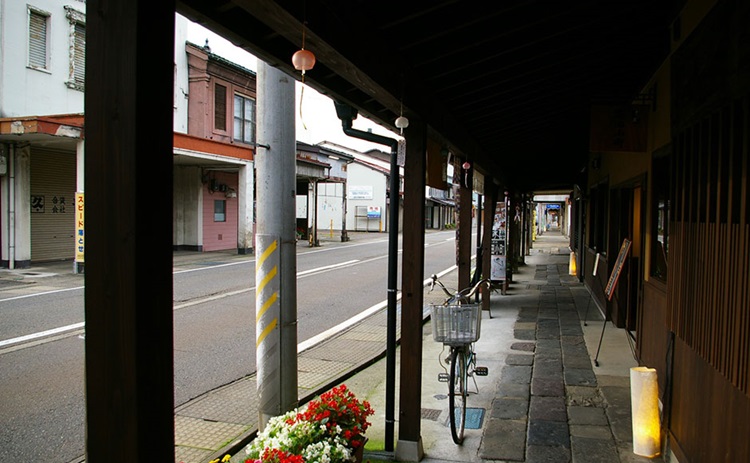 A “Ganki” is an appentice that stretches in front of a house. The role it plays is more of snow protection rather than shading from the sunlight. This feature was quite often seen in cities on Sea of Japan side where snow is abundant, but this has declined since the Meiji Era.

There are a number of streets lined by houses that feature this ganki in Takada District of Joetsu City, with such alleys of houses extending 16 km in total. This length is the longest in Japan. Ganki-dori alleys display the wisdom for lives in a truly snowy country. Roads can be secured during winter when snow accumulates and the locals warmly welcome tourists.

Such ganki-dori alleys can be seen on Omachi-dori Avenue, Higashi-honcho Avenue, Minami-honcho Avenue and the like. Facilities have been established by utilizing existing town houses in the vicinity of Honcho Rockuchome, such as “Townhouses Exchange Center Komachi Takada”, where visitors can drop in to see a blow-by or a dozo fireproof storehouse (Internal viewing free of charge). “Takada Sekaikan”, can be reached after walking 1 minute from here, is the oldest movie theater in Japan, which started its operations in 1911. “Imai Somemonoya Dye Factory” built during Edo Era is one of the oldest townhouse structures in Takada, featuring ganki among others. There are many tourist attractions on ganki-dori alleys, where visitors are welcome to stop by as they stroll through.
Read More
Hide
Get directions
Book a nearby hotel ¥17,400 ~