The refined and elegant dignity of the castle has to be seen to be believed. 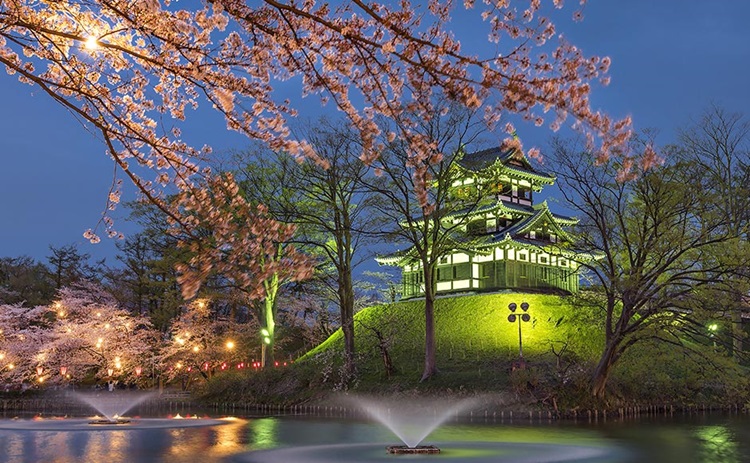 Conveniently located in the city, this 50 hectare park is overlooked by Takada Castle which was built by Tadahiro Matsudaira, the sixth son of the shogun, Tokugawa Ieyasu There is plenty to do inside the park beside the restored Takada Castle, such as the Mimei Ogawa Literature Museum, track and field sports facilities, and bronze statues arranged along the paths. The park also contains the former mansion of the famous Japanese painter, Kokei Kobayashi, and Gokuraku Bridge that connects the inner citadel and the outer citadel.
Approximately 4,000 cherry trees bloom in spring and at night the illuminated castle and moat are an amazing sight. The park is considered one of the top three in Japan for night-time cherry blossom viewing. Lotus flowers fill the castle's outer moat in summer and is said to be one of the most magnificent views in Japan.

The 3-tiered Takada Castle which was once a symbol of Japan has been faithfully restored to its former glory. There are 3 palatial floors standing a total of 15 m tall, approximately 9.1 m east-west and 10.9 m north-south. The refined and elegant dignity of the castle has to be seen to be believed.
Read More
Hide
Get directions
Book a nearby hotel ¥17,400 ~