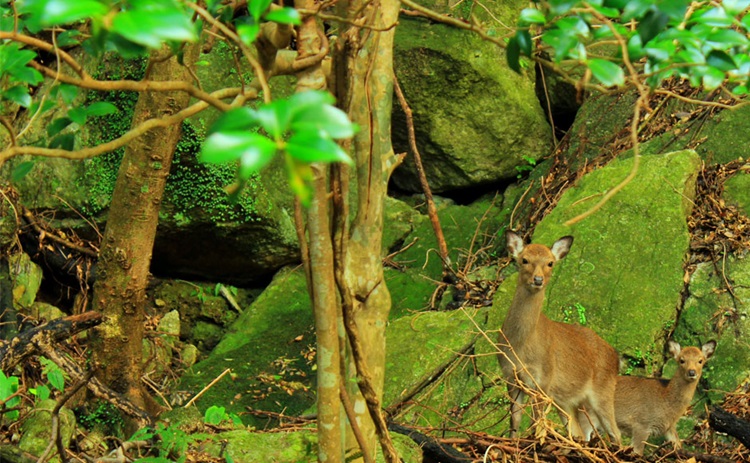 Easily accessible by high-speed ferry, the island of Yakushima is one of Kagoshima’s top tourist attractions. To explore all that this amazing island has to offer, a great place to start is Shiratani Unsuikyo Gorge. With an elevation ranging from 600 to 1,300 meters and an area of 424 hectares, the wooded area extends from an evergreen broadleaf forest to a grove of ancient cedar trees. The footpath along the Shiratani Creek is lined with rare ferns and mosses as well as the evergreen broadleaf forest mixed with ancient Japanese cedars, known as yakusugi. This is the lush, mystical Yakushima often captured in photographs.
Piled boulders, the steep gorge, and the azaleas and other flowers blooming along the banks of the creek create a landscape that is truly a masterpiece of nature. Beautiful falls and rapids can be found at every turn, including Hiryu Otoshi, a majestic waterfall tumbling through a gap between granite rocks. When developing the trails, great care was taken to ensure walkability without detracting from the natural environment. For example, the steps in the forest use Japanese cedar, while the footpath is made with native Yakushima stones. Handmade benches can be found at the 979-meter-high Tsujitoge Pass, making it the perfect stop to take a rest.
Also of note is the area known as the “Princess Mononoke Forest,” which served as inspiration for the animated film Princess Mononoke, and is said to have been visited by director Hayao Miyazaki many times as he worked to bring the movie’s forests to life. The forests of Shiratani Unsuikyo Gorge also appear in one of the movie’s scenes, in a testament to the captivating power of this special place.
Read More
Hide
Get directions
Book a nearby hotel ¥4,700 ~