Uto Shrine
A Shinto shrine with a history closely intertwined with that of the city of Aomori.

Lots of beautiful works by the Aomori-born artist Shiko Munakata. 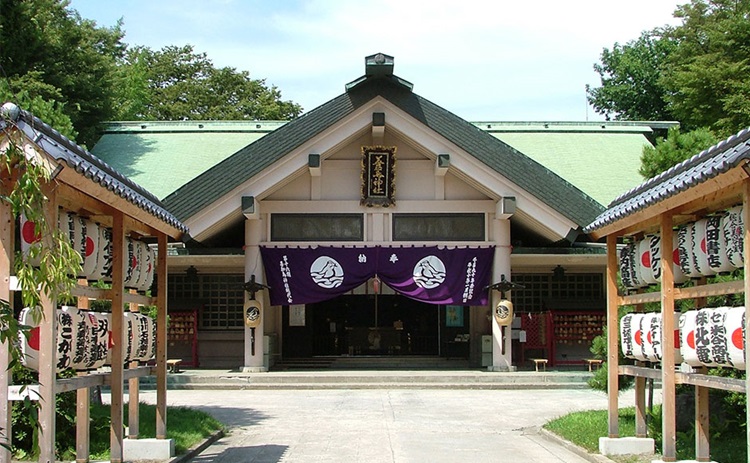 The Japanese name for a rhinoceros auklet is uto. Written with an unusual set of Chinese characters, it literally means “bird bearing knowledge of righteousness,” and is seen by Japanese-speakers as a beautiful but unusual name. It is believed that the ancient Japanese gave this fascinating sea bird such a name as they considered it to be a messenger from the gods in heaven. There are a number of different theories as to why this shrine was given then name “Uto,” but the one thing that is certain is that this area was once known as “Uto Village.” The shrine’s history is thought to be closely intertwined with that of the city of Aomori.
The shrine grounds are home to the scenic beauty of Uto Pond and Nakasu, as well as a small shrine dedicated to the goddess Benzaiten, which dates to 1641. There is a great deal of rich history in this spot. Another must-see are the beautiful prints by the Aomori-born woodcut artist, Shiko Munakata. When Shiko was a child he would supposedly play here until dark, and Uto Shrine was also where he held his wedding ceremony. The shrine’s holdings include a number of works by this famous artist, including Uto Parent and Child. There are also stones inscribed with poems by the haiku poet Matsuo Basho and the waka poet Sugae Masumi, as well as a memorial stele marking the end point of the ancient Oshu Kaido highway. The shrine is surrounded by greenery and watery beauty, so you can come here to be reminded of the endless flow of time.
Read More
Hide
Get directions