Nakamise Street
The front approach to Sensoji temple have been enjoyed for generations like a festival everyday.

It is a fun walk through narrow street with the freshly baked rice crackers and steaming manju bean paste buns delighting the senses. 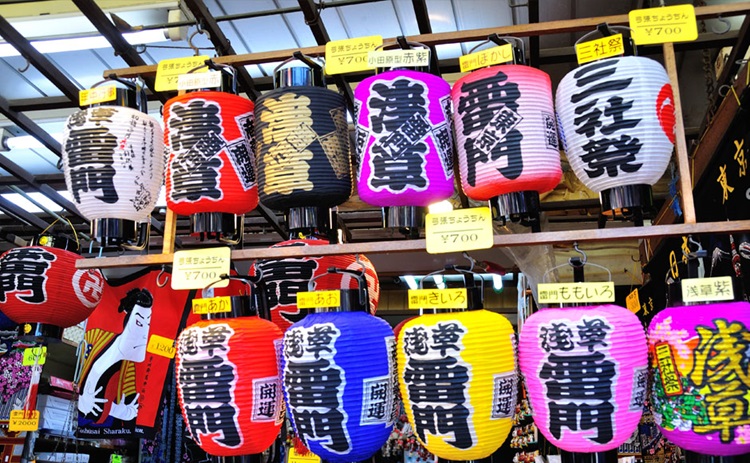 The Nakamise Shopping Street offers 250 meters of pedestrian shopping from Kaminarimon, the "Thunder Gate" to Hōzōmon, the "Treasure-House Gate" of Sensoji Temple. Crafts and souvenirs can be bought all along the street including the famous snacks and treats that have been enjoyed for generations.

Ieyasu Tokugawa, the first Tokugawa shogun gave the temple increased status which added to the crowds of worshippers. The locals charged with cleaning the complex were given the privilege of opening stores in the vicinity. This was the birth of Nakamisei, said to be one of the oldest shopping streets in Japan.

300 years ago teahouses were crammed from Denpo-in Temple to the Niomon Gate, and souvenirs, toys and snacks were sold around the Kaminarimon Gate. During the Meiji Restoration the stores were built of red brick but these were destroyed in an earthquake. The current incarnation dates from after World War II.
There are 54 on the east side of the street and 35 on the west side. It is a fun walk through narrow street with the freshly baked rice crackers and steaming manju bean paste buns delighting the senses.

The cherry trees at the nearby Sumidagawa River were planted by the shogun, Tokugawa Yoshimune, nearly 300 years ago. The classic path following the cherry trees of the Sumida River to Nakamiseyo Shopping Street has been enjoyed for generations.
Read More
Hide
Get directions
Book a nearby hotel ¥5,100 ~